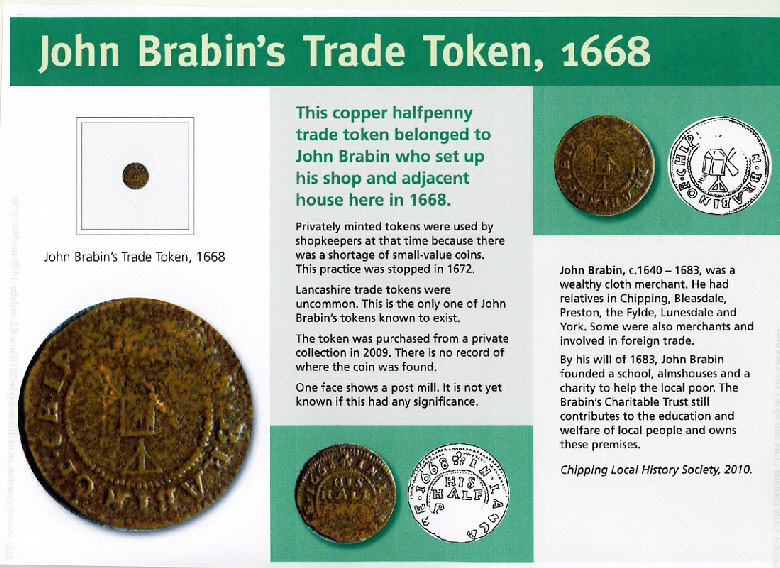 AN historic ‘coin’ has returned home to Chipping after 340 years. Chipping Local History Society is celebrating this remarkable homecoming – after the token bearing the inscription ‘John Brabin of Chipping in Lancashire 1668 His Halfpenny’ recently came up for auction and was secured for the village by a consortium that included the history society.

An article in Coin News in October 2009 by Frances Simmons of Simmons Gallery in London, which was entrusted with the disposal of the collection of the late EJ Luck, sheds some light on the history of this and other tokens.

‘During a period of a quarter of a century – from the execution of Charles I, through the Commonwealth and into the period of the restoration of Charles II – there was a dearth of small change for everyday transactions. Lead tokens had been produced since the 13th century but with the death of Charles, the   exclusive royal prerogative to coin base metal coinage disappeared. So, to meet a business need, farthings and halfpennies were issued by innkeepers and small traders: bakers, iron mongers, tallow chandlers, grocers and cloth merchants, like Brabin.’

The token is believed to be unique – there are no other examples known despite there being a number of specialist reference books and many collectors of 17th century tokens.

In 1672 with the issue of regal halfpennies and farthings, unofficial tokens or coins were prohibited and the vast majority withdrawn from circulation, discarded and either melted down or destroyed. It is only by chance that a single example of the Brabin halfpenny survived,’ explained Frances Simmons.

As mentioned, the token bears the date of 1668, which is significant because this is the datestone above the door at Brabin’s Shop and Gallery in Chipping. John Brabin established his business in 1668 when he set up a shop to trade cloth and a dye-house. He died in 1683 and through his will set up a trust to support education and help the poor of Chipping, Thornley and Leagram.

Brabin’s Trust is still flourishing today and owns Brabin’s Shop in Talbot Street, the Almshouses on Windy Street, plus other property around the village. The shop is thought to be the oldest continually trading shop in the country and, despite losing its status as a full-time Post Office in July 2008, is still a centre for the community as an Outreach Post Office and newsagent. The business has been developed over recent years to include a Cafe and Tea Garden alongside sales of groceries, gifts and sweets. 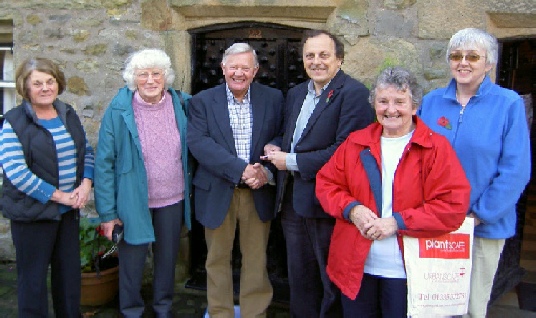