The name “Chipping” is derived from the Old English “ceping”, which means “a market”. The market developed near the bridge over Chipping Brook at the entrance to the vast Royal Forest of Bowland east of the village. This “Forest” was an area of ancient cattle farms, or “vaccaries”, owned by the crown after the Norman Conquest and managed by State officials. Timber and the Royal deer were protected by “Forest Law”, and in Leagram, adjacent to Chipping, a medieval deer park was created. The area passed into private ownership from the mid-16th century. To the west of Chipping outside Forest control, the land was divided into private manors, more populated and more diverse. The Chipping market was thus at a point of exchange between two different economies and a major outlet for the Bowland cattle farms.

There were two fairs (markets) each year, on the first Tuesday after Easter and on St. Bartholomew’s day, August 24th. Cattle would be sold in the street. Farmers would take the opportunity of visiting the village shops, meeting tradesmen such as butchers and leather workers, and socialising in the alehouses. The last markets in Chipping were sheep sales, at the back of a local public house the Talbot, in the 1950s.

By-trades were always important sources of extra income in the farming households-for example, cheese making, wood and leather working and especially textiles. Spinning and handloom weaving of wool and flax became increasingly important in the late 17th and 18th centuries. Some wool was available from local fell sheep, but dealers brought in supplies and sold on the finished thread or cloth. One of these cloth merchants, John Brabin, with his shop in the centre of the village, became the local benefactor founding a school and charity by his will of 1683.

Chipping flourished industrially when the waterpower of the district was fully developed. By the mid 19th century, there were seven water-powered mills on Chipping Brook, some above and some below the village. There were two cotton spinning mills and some works producing spindles, flyers and rollers for spinning machines, an iron and brass foundry, a corn mill, a nail works and a chair works. Two former mills were used for cheese making in the 20th century. One waterwheel can still be seen in the village and, until recently, Chipping was well known for its chairs. 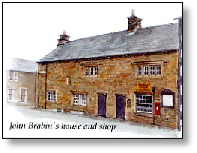